IPsec (Internet Protocol Security) is a series of protocols that is used to protect IP traffic between two points on a network. It offers confidentiality, data integrity, and a high degree of security through its advanced packet encryption. For these reasons, IPsec is most commonly used for business VPNs.

In this article, you’ll learn about the two primary modes of IPsec—tunnel mode and transport mode—and the use cases for each.

In order to authenticate data packets and guarantee their integrity, IPsec includes two protocols. These are the AH (Authentication Header) protocol and the ESP (Encapsulating Security Payload) protocol. Both protocols, in turn, support two encapsulation modes—tunnel mode and transport mode. Let’s break down their core differences.

These IPsec gateways in turn can connect two different networks securely. Using secure IPsec proxies like the ones shown in the diagram below can be very useful for connecting two distant branches using an encrypted connection.

The process used by IPsec to encapsulate the original IP header differs depending on whether AH tunnel mode or ESP tunnel mode is used:

Since a new IP header isn’t created, the process used by transport mode is less complex than tunnel mode: 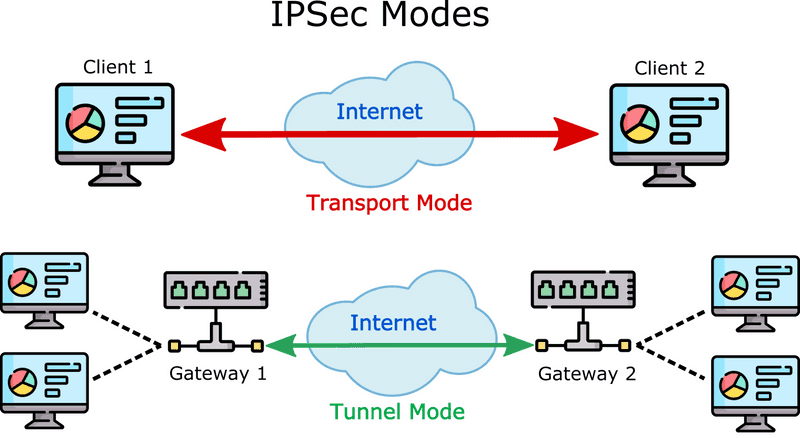 When to Use IPsec Tunnel Mode

Tunnel mode is most commonly used for configurations that need a secure connection between two different networks, separated by an intermediate untrusted network (like the Internet).

Despite its advantages, tunnel mode has a greater overhead and smaller MTU than transport mode.

When to Use IPsec Transport Mode

Transport mode is not without its flaws. It has poor compatibility with security gateways, as well as greater difficulty in implementing traversal NATs. For this reason, transport mode can’t be used in protected gateway-to-gateway configurations.

Setting Each Mode Up

During the IPsec tunnel set up, the peers establish security associations (SA), defining which parameters will be used to secure the traffic between them. The process of negotiating such parameters happens in two phases:

IKE Phase 1: This phase creates a secure tunnel to protect the negotiation messages peers will exchange in the second phase.

IKE Phase 2: During this phase, the SA parameters of a second IPsec tunnel are negotiated. While the first tunnel is used to protect SA negotiations, this tunnel protects the data.

Once the secure tunnel (IKE Phase 2) has been established, IPsec protects the traffic sent between the two tunnel endpoints. It does this by applying the security parameters defined by the SAs during tunnel configuration. The encapsulation mode is part of these parameters.

For clarification, IPsec only uses the IKE protocol to build secure tunnels between the two devices and set up SA parameters. Authentication and encryption are handled by the AH and ESP protocols, respectively.

Regardless of whether you use tunnel mode or transport mode, the encapsulation mode used by the AH and ESP protocols must be set up during IKE Phase 2—before the actual data transmission.

In this article, you’ve learned the main differences between IPsec’s two encapsulation modes: transport mode and tunnel mode. You should also know the pros and cons of both modes, and consequently understand best use cases for each.

The intricacy of IPsec connections represents an opportunity to consider alternative ways to securely access your remote data—without falling victim to hacking due to a bad configuration. Cutting-edge solutions like Twingate enable your business to rapidly implement a modern, zero-trust network that is more secure and maintainable than conventional VPNs.

Request a Twingate demo today and deploy secure network connections in a matter of minutes.

Get set up in minutes

Create a Twingate NetworkRequest a Demo